Aurosoft would like to introduce their readers with the most prospecting product of Apple for the coming year- iPad3
you can visit us on: www.aurosoft.net
We all know that in the technology world Apple is on the top. It always astonished us by its iOS applications. The Apple ipad is world’s best-selling tablets, and the iPad 3 is one of the most awaited devices from Apple this year. This blog will guide you about the new features of ipad3.
In a nutshell, the Apple iPad3 will feature a new, thinner and sleeker design, down nearly 20 percent in size compared to the iPad 2. It will also support full touchscreen HD display with a screen resolution of 2048 x 1536.
Apart from that, the iPad 3 will have a lighter battery which will reduce the weight of the tablet. However, the battery is reported to cost 20 to 30 percent more than the current iPad’s battery, and will also have a longer battery life.
It is also expected that the iPad 3 will have a wireless charging technology, which will be able to charge the battery and transfer data wirelessly. 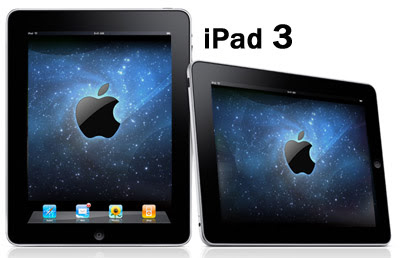 The current Apple iPad 2 has a 900MHz dual-core ARM Cortext-A9 processor, Apple A5 chipset and PowerVr SGX543MP2 GPU. This certainly made the Apple iPad 2 a powerful tablet and a main competitor in the world of tablets. Now Apple is aiming to make the competition tougher by sporting an A6 Quad-core Processor in the iPad 3. This would make the iPad 3 as powerful as any high-end desktop. 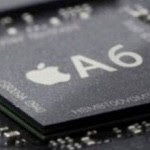 According to Linley Group senior analyst Kevin Krewell, “We expect the A6 will be a quad-core ARM Cortex-A9 design, which would be competitive with next year’s best mobile processors. In 2012,

Nvidia will offer a quad-core Cortex-A9 processor, and Qualcomm will have the aforementioned MSM8960, a dual-core A15-class processor operating at 1.7GHz. Fabricating Apple’s A6 in 28nm (instead of the 40nm process Nvidia is using for its quad-core part) will reduce both die cost and power, yielding a much better product.”

The iPad 3 will come with the latest iOS 5, which will host the multi-touch gesture technology. However, analyst and tech enthusiasts predict that Apple would introduce OS X Lion for the tablet, since it will be powered by a quad-core processor.
This will also include multitasking features, such as notifications, task-finishing, app-switching, location and background sound.

Apple enthusiast expected the Retina Display feature on Apple iPad 2; however, Apple has been working majorly for an improved version of it to include it in the iPad 3. The iPhone 4 currently supports the Retina Display with a screen resolution of 960 x 640. Apple explains Retina Display as: “Developing pixels a mere 78 micrometers wide, Apple engineers were able to pack four times the number of pixels into the same 3.5-inch (diagonal) screen found on earlier iPhone models. The resulting pixel density of iPhone 4 – 326 pixels per inch – makes text and graphics look smooth and continuous at any size.”

With the Retina Display feature, the screen resolution of the iPad3 will be 2048 x 1536 pixels. However, it is said that the third version of the tablet is delayed due to Retina Display issues, and Apple is expected to ship the tablet in early 2012. The next generation iPad will have a retina display with four times the pixels (2048 x 1536) of the current iPad2. 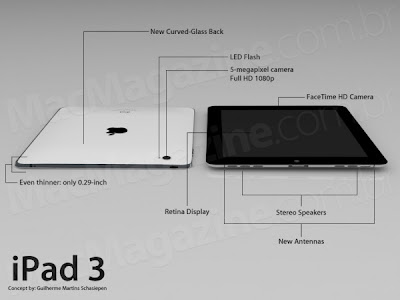 Apple announced its Cloud services during the WWDC 2011, and will definitely include the iCloud technology both in the iPhone 5 and iPad 3. With iCloud users can store photos, apps, calendars and access songs on iTunes without having them to store in the phone’s memory.

The iPad 3 will come with an improved camera, since the previous version of the table didn’t seem impressive enough. Unlike the iPad 2, the new tablet will come with LED flash to support the camera. It is expected to have a 5MP camera with 1080p or 720p video recording quality of 60 frames per second. The technology made by OmniVision will help reduce the size of the table by 20 percent.

Apple has already been granted patents on this technology, and is working real hard to make the iPad3 fingerprint proof. The touch screen will be coated with oleophobic materials, which will reduce the oil and fingerprints on the screen.
Please give your feedback about this blog. We will update you for the same in coming days.
visit us on: www.aurosoftindia.com