It’s a Apple’s next generation compiler technology. The Apple LLVM compiler does more than build your app. Apple LLVM technology is integrated into the entire development experience. The same parser used to build C/C++ and Objective-C powers Xcode’s indexing engine, providing incredibly accurate code completions. As you work, Apple LLVM is constantly evaluating what you type, identifying coding mistakes that Xcode shows as Live Issues, and thinking ahead for ways to Fix-it for you. Other compilers can tell you what is wrong, but Apple LLVM can make it right. 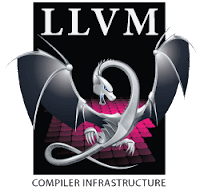 The first acronym in our alphabet soup is GCC, originally the GNU C Compiler. This project began in the mid 80s by Richard Stallman of the Free Software Foundation. Stallman's radical idea was to develop software that would be shared rather than sold, with the intent of delivering code that anyone could use provided that anything they contribute to it would be passed along in a form others could also use.

Stallman was working to develop a free version of AT&T's Unix, which had already become the standard operating system in academia. He started at the core: in order to develop anything in the C language, one would need a C compiler to convert that high level, portable C source code into machine language object code suited to run on particular processor architecture.

GCC has progressed through a series of advancements over the years to become the standard compiler for GNU Linux, BSD Unix, Mac OS X, and a variety of embedded operating systems. GCC supports a wide variety of processor architecture targets and high level language sources.

Apple uses a specialized version of GCC 4.0 and 4.2 in Leopard's Xcode 3.1 that supports compiling Objective-C/C/C++ code to both PowerPC and Intel targets on the desktop and uses GCC 4.0 to target ARM development on the iPhone.

GCC currently handles all those phases for compiling code within Xcode, Apple's Mac OS X IDE (Integrated Development Environment). However, there are some drawbacks to using GCC.

One is that it is delivered under the GPL, which means Apple can't integrate it directly into Xcode without making its IDE GPL as well. Apple prefers BSD/MIT style open source licensees, where there is no limitation upon extending open projects as part of larger proprietary products.

Another is that portions of GCC are getting long in the tooth. LLVM is a modern project that has aspired to rethink how compiler parts should work, with emphasis on Just In Time compilation, cross-file optimization (which can link together code from different languages and optimize across file boundaries), and a modular compiler architecture for creating components that have few dependencies on each other while integrating well with existing compiler tools.

LLVM only just got started at the University of Illinois in 2000 as a research project of Chris Lattner. It was released as version 1.0 in 2003. Lattner caught the attention of Apple after posting questions about Objective-C to the company's objc-language mailing list. Apple in turn began contributing to the LLVM project in 2005 and later hired Lattner to fund his work. 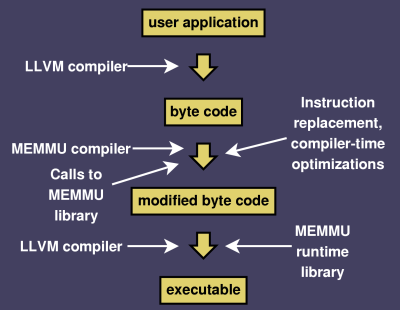 Last year the project released Clang as an Apple led, standalone implementation of the LLVM compiler tools aimed to provide fast compiling with low memory use, expressive diagnostics, a modular library-based architecture, and tight integration within an IDE such as Xcode, all offered under the BSD open source license.

In addition to the pure LLVM Clang project, which uses an early, developmental front end code parser for Objective C/C/C++, Apple also started work on integrating components of LLVM into the existing GCC based on Lattner's LLVM/GCC Integration Proposal. That has resulted in a hybrid system that leverages the mature components of GCC, such as its front end parser, while adding the most valuable components of LLVM, including its modern code optimizers.

LLVM-GCC is designed to be highly compatible with GCC so that developers can move to the new compiler and benefit from its code optimizations without making substantial changes to their workflow. Sources report that LLVM-GCC "compiles code that consistently runs 33% faster" than code output from GCC.

Apple also uses LLVM in the OpenGL stack in Leopard, leveraging its virtual machine concept of common IR to emulate OpenGL hardware features on Macs that lack the actual silicon to interpret that code. Code is instead interpreted or JIT on the CPU.

Apple is also using LLVM in iPhone development, as the project's modular architecture makes it easier to add support for other architectures such as ARM, now supported in LLVM 2.0 thanks to work done by Nokia's INdT.

LLVM plays into Apple's ongoing strategies for multicore and multiprocessor parallelism. CPUs are now reaching physical limits that are preventing chips from getting faster simply by driving up the gigahertz. Intel's roadmaps indicate that the company now plans to drive future performance by adding multiple cores. Apple already ships 8-core Macs on the high end, and Intel has plans to boost the number of cores per processor into the double digits.

Taking advantage of those cores is not straightforward. While the classic Mac OS' and Windows' legacy spaghetti code was made faster through a decade of CPUs that rapidly increased their raw clock speeds, future advances will come from producing highly efficient code that can take full advantage of multiple cores.

Existing methods of thread scheduling are tricky to keep in sync across multiple cores, resulting in inefficient use of modern hardware. With features like OpenCL and Grand Central Dispatch, Snow Leopard will be better equipped to manage parallelism across processors and push optimized code to the GPU's cores, as described in WWDC 2008: New in Mac OS X Snow Leopard. However, in order for the OS to efficiently schedule parallel tasks, the code needs to be explicitly optimized for for parallelism by the compiler.

LLVM will be a key tool in prepping code for high performance scheduling. As the largest contributor to the LLVM project, Apple is working to push compiler technology ahead along with researchers in academia and industry partners, including supercomputer maker Cray. Apple is also making contributions to GCC to improve its performance and add features.

Because both projects are open source, it's easy to find hints of what the company is up to next. Enhancements to code debugging, compiler speed, the speed of output code, security features related to stopping malicious buffer overflows, and processor specific optimizations will all work together to create better quality code.

That means applications will continue to get faster and developers will have an easier time focusing on the value they can add rather than having their time consumed by outdated compiler technology.

IPhone is the King of today’s Technologies World and Aurosoftindia is the King Maker in its own unique way. Today’s customers are crazy behind iPhone’s latest Features and Technologies. Aurosoft have the expert team of iPhone development. Our iPhone developers have vast technical knowledge and uses Logic to make the rich iPhone Application. iPhone Application development and programming always requires innovative thinking and in-depth technological knowledge. That is why; you need an expert and skilled iPhone application developer who can find a set of feasible solutions towards your idea or the business needs & for this Aurososft Technologies is the best.


Our iPhone experts are having excellent knowledge of Objective-C programming language with COCOA. They are also expert in technologies like Phone Gap, Sencha Touch and Titanium for mobile application developments. Aurosoft Technologies provide the cost effective solutions in iPhone development as it’s too much costly for common people. We believe in giving best quality with best features in iPhone development as per today’s iPhone market demand.