If you are a fan of Chrome - the popular desktop Web browser made by Google, then you will love to get it on your Android device, especially since now it has received a major update, which adds new features and expands language support.
The update also brings cool, new features. For instance, users can now request for desktop version of a Web site for better view, instead of accessing only mobile version. Then there's the all-new Incognito mode that lets you browse with privacy so that the browsing history is not saved on the device. Browser tabs are also stacked like cards for easy viewing. Thanks to the built-in accelerometer, users can flip through these tabs by tilting the device.1 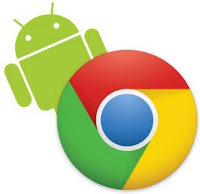 Another useful feature added with this update is the link zoom functionality. Whenever a user is trying to click on a URL link, which is relatively hard to touch as surround by some other URL's, then the browser will zoom in on that area in a bubble making it easy to select the desired link. External links will also now open in tabs, instead of new windows, when multiple tabs are opened.

Moreover, you can use the browser on a Wi-Fi network with proxy setup. Users can assign application to handle links on their own when clicking on a new URL in Chrome. And, like the desktop version, the mobile version of Google Chrome also has ability to add bookmarks to home screen as shortcuts.

With new smartphones getting rolled out in the market, featuring Ice Cream Sandwich out of the box, the future for Chrome is bright. We may see Google replacing its Android Web kit browser in its mobile operating system with Chrome browser in near future.
Nonetheless, despite this recent update, the Google's favorite browser is not yet as perfect as it is on desktop. Still it is in beta mode and Flash support is currently off. The biggest drawback of Chrome Beta is that it is only available for devices running Android OS v4.0 codenamed Ice Cream Sandwich.

Although it was only released in 2008, Google’s Chrome web browser has quickly gained popularity, becoming the second most popular browser nowadays, behind the faltering Internet Explorer, which is very close to overcome. But despite its great success among desktop users, we haven’t seen a mobile Chrome version for Android geeks until a couple of month’s back, when finally Chrome for Android app was made available for download on Android Market (now Google Play).

Only available on Ice Cream Sandwich devices, the Chrome for Android Beta app has still made hundreds of thousands of users happy with its speed and simplicity. However, the browser debuted with several bugs and a couple of shortcomings, which is understandable when you consider that the browser is still in public beta. 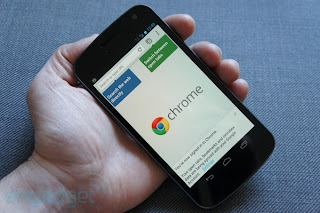 Most of those bugs and flaws should now be solved, as an update has just been rolled out on Google Play. The update doesn’t come with anything critical or extremely noteworthy, but you should notice a significant smoother browsing experience, with several improvements in terms of user friendliness.
The main changes here being the addition of downloads, something that was truly being missed on Android phones and tablets.

Then as you can see they’ve integrated the YouTube app to work with old YouTube embed content from sites. Now you’ll be able to easily watch videos from your favorite sites right inside the YouTube app, even if the content is old.

Then we have a country-specific search engine that goes nicely with the last update, which added support for tons of additional languages. Google recently stated Chrome for Android will improve by “leaps and bounds” and while this update isn’t anything major, we still expect big things in the future from Google and Chrome.

The recent update brings 31 new languages to Chrome Beta and can be downloaded in all countries where Google Play is available. The older version was only available in English language.
You can now add bookmarks as shortcuts on your home screen in order to get to your favorites sites faster, you can access desktop versions of specific websites if you aren’t satisfied with their mobile versions, and you can choose your favorite apps to handle links opened in Chrome.

·         Some drawbacks
·       Chrome Beta is available on Google Play Store. But you will need an ICS    enabled smartphone or tablet in order to download it. And a big share of Android devices runs Android v2.3 Gingerbread at the moment (and more than 90% of Android devices do not run Android 4.0 ICS). So the browser is not as high on downloads as expected, but it is marching forward day by day.

·         The update doesn’t come with Flash support, one of the missing features that many users have complained about. Furthermore, there’s no reason to think that the Chrome for Android browser will support Flash anytime soon, given Google’s commitment to move away from Adobe’s platform. Unfortunately for Android users with Honeycomb, Gingerbread, or older devices, their phones and tablets are still not supported by Chrome for Android.

·     It's still only available for Ice Cream Sandwich, but those not bound by an older OS can now download a fairly significant update to Google's Chrome for Android web browser.

Aurosoft Technologies offers services for the Android Applications Development by using Android SDK under the influence of experienced and talented Mobile application developers that are best in this field. We, at Aurosoft Technologies follow the benchmarking standards & the finest of the robust tools & technologies to give you the highly classy services.

Visit us on: www.aurosoftindia.com
Checkout our recent application on iTunes from here,
http://itunes.apple.com/us/app/the-greetings/id501615713?mt=8