You can build an iPhone app that informs you which direction you are facing using magnetometer in iOS. In addition to the accelerometer, the iPhone 3GS has a magnetometer that acts as a digital compass. Combining the heading information returned by this device with the roll and pitch information returned by the accelerometer will let you determine the true orientation of the iPhone in real time.

The magnetometer is measuring the strength of the magnetic field surrounding the device. In the absence of any strong local fields, these measurements will be of Earth’s ambient magnetic field, allowing the device to determine its “heading” with respect to the geomagnetic North Pole. The geomagnetic heading and true heading, relative to the geographical North Pole, can vary widely (by several tens of degrees depending on your location).

No matter where you stand on Earth, you can hold a compass in your hand and it will point toward the North Pole. What an unbelievably neat and amazing thing! Imagine that you are in the middle of the ocean, and you are looking all around you in every direction and all you can see is water, and it is overcast so you cannot see the sun... How in the world would you know which way to go unless you had a compass to tell you which way is "up"? Long before GPS satellites and other high-tech navigational aids, the compass gave humans an easy and inexpensive way to orient themselves. 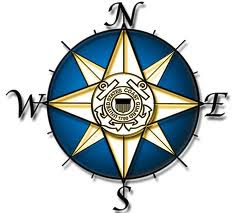 A compass is an extremely simple device. A magnetic compass (as opposed to a gyroscopic compass) consists of a small, lightweight magnet balanced on a nearly frictionless pivot point. The magnet is generally called a needle. One end of the needle is often marked "N," for north, or colored in some way to indicate that it points toward north. On the surface, that's all there is to a compass.

A compass is a navigational instrument that measures directions in a frame of reference that is stationary relative to the surface of the earth. The frame of reference defines the four cardinal directions (or points) – north, south, east, and west. Intermediate directions are also defined. Usually, a diagram called a compass rose, which shows the directions (with their names usually abbreviated to initials), is marked on the compass. When the compass is in use, the rose is aligned with the real directions in the frame of reference, so, for example, the "N" mark on the rose really points to the north. Frequently, in addition to the rose or sometimes instead of it, angle markings in degrees are shown on the compass. North corresponds to zero degrees, and the angles increase clockwise, so east is 90 degrees, south is 180, and west is 270. These numbers allow the compass to show azimuths or bearings, which are commonly stated in this notation.

There are two widely used and radically different types of compass. The magnetic compass contains a magnet that interacts with the earth's magnetic field and aligns itself to point to the magnetic poles. The gyro compass (sometimes spelled with a hyphen, or as one word) contains a rapidly spinning wheel whose rotation interacts dynamically with the rotation of the earth so as to make the wheel process, losing energy to friction until its axis of rotation is parallel with the earths.

IPhone is the King of today’s Technologies World and Aurosoftindia is the King Maker in its own unique way. Today’s customers are crazy behind iPhone’s latest Features and Technologies. Aurosoft have the expert team of iPhone development. Our iPhone developers have vast technical knowledge and uses Logic to make the rich iPhone Application. iPhone Application development and programming always requires innovative thinking and in-depth technological knowledge. That is why; you need an expert and skilled iPhone application developer who can find a set of feasible solutions towards your idea or the business needs & for this Aurososft Technologies is the best.

Our iPhone experts are having excellent knowledge of Objective-C programming language with COCOA. They are also expert in technologies like Phone Gap, Sencha Touch and Titanium for mobile application developments. Aurosoft Technologies provide the cost effective solutions in iPhone development as it’s too much costly for common people. We believe in giving best quality with best features in iPhone development as per today’s iPhone market demand.