Apple announced its new iPhone 4 with many new features but Aurosoft Technologies want to explain a little more about the gyroscope feature, yes it will bring stunning six-axis motion sensing to this smartphone.

The accelerometer that enables the iPhone to automatically adjust from landscape to portrait mode. For gaming applications, the accelerometer has been used to enable players to shake the iPhone or tilt it like a steering wheel to make stuff happen on screen. 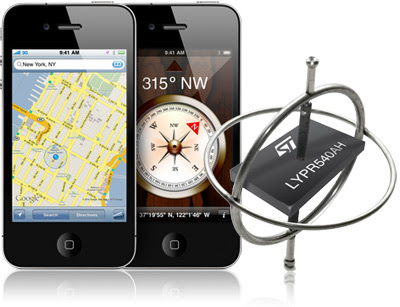 iPhone 4 adds a gyroscope – a device that measures orientation, rather than just velocity. Gyroscopes are commonly used in aircraft to measure pitch, roll and yaw, and the iPhone’s Gyroscopes is no different in this regard. The gyroscope feature will allow the iPhone 4 to detect roll, yaw and pitch, it works side-by-side with the accelerometer to give you a better gaming experience amongst other this, and it also uses CoreMotion programming tools for better precision.


According to Wikipedia's definition, "A gyroscope is a device for measuring or maintaining orientation, based on the principles of conservation of angular momentum." The key phrase is measuring or maintaining orientation, which is the exact reason an iPhone 4 contains one of these gizmos.The iPhone 4 utilizes a microscopic, electronic version of a vibrational gyroscope, called a MEMS gyroscope.


A microelectromechanical system (MEMS) is an embedded system that integrates electronic and mechanical components at a very small scale.A basic MEMS device consists of an ASIC and a micro-machined silicon sensor.The AGD1 2022 FP6AQ chip found in the iPhone 4 is a MEMS gyroscope rumored to be designed bySTMicroelectronics.


When a user rotates the phone, the proof mass gets displaced in the X, Y, and Z directions by Coriolisforces. An ASIC processor senses the proof mass' displacement through capacitor plates located underneath the proof mass, as well as finger capacitors at the edges of the package.

We would like to keeps you update about latest Technologies of Mobile apps.