The Session Initiation Protocol (SIP) is an IETF (Internet Engineering Task force )-defined signaling protocol widely used for controlling communication sessions such as voice and video calls over Internet Protocol (IP). The protocol can be used for creating, modifying and terminating two-party (unicast) or multiparty (multicast) sessions. Sessions may consist of one or several media streams.

The following features of SIP play a major role in the enablement of IP telephony and VoIP:
Voice over IP (VoIP)
VoIP is a technology sending voice over packet networks. Earlier people were using PSTN networks and Mobile Networks to communicate each other. The rapid growth of internet and network technology introduced voice over data networks with carrier grade quality. In simple terms, VoIP means making or receiving phone calls over Internet or Internal Network. 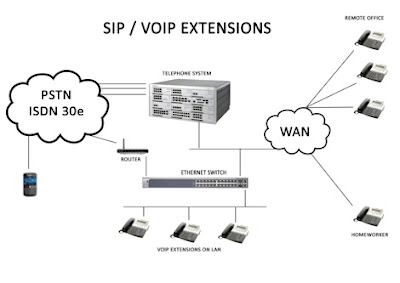 There are 3 main causes for the evolution of the Voice over IP market:


The following protocols are used in VOIP:

The Gateway converts media provided in one type of network to the format required for another type of network. For example, a Gateway could terminate bearer channels from a switched circuit network (i.e., DS0s) and media streams from a packet network (e.g., RTP streams in an IP network). This gateway may be capable of processing audio, video and T.120 alone or in any combination, and is capable of full duplex media translations. The Gateway may also play

audio/video messages and performs other IVR functions, or may perform media conferencing.

Coders are used for efficient bandwidth utilization. Different coding techniques for telephony and voice packet are standardized by the ITU-T in its G-series recommendations: G.723.1, G.729, G.729A etc.

The coder-decoder compression schemes (CODECs) are enabled for both ends of the connection and the conversation proceeds using Real-Time Transport Protocol/User Datagram Protocol/Internet Protocol (RTP/UDP/IP) as the protocol stack.

Quality of Service
A number of advanced methods are used to overcome the hostile environment of the IP net and to provide an acceptable Quality of Service. Examples of these methods are: delay, jitter, echo, congestion, packet loss, and missordered packets arrival. As VoIP is a delay-sensitive application, a well-engineered, end-to-end network is necessary to use VoIP successfully. The Mean Opinion Score is one of the most important parameters that determine the QoS.


Services
The following are examples of services provided by a Voice over IP network according to market requirements:


Difference between VoIP and SIP


Checkout our recent application on: